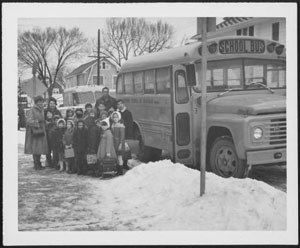 The idea of a Jewish Day school was first formulated in 1957 by Dr. Nathan and Toby Ticktin Back, Rabbi and Mrs. Alvin Marcus, Dr. and Mrs. Henry Hausdorf who turned to Rabbi Isaac Klein (Temple Emanu-el) and Henriette Klein to bring it to fruition. By the time Kadimah School of Buffalo opened in September, 1959, with 15 students, it had a small and dedicated group of benefactors that offered financial support, including the Backs and the Kleins. These individuals were celebrated in 1965 as “Founders” and also included Joseph Sapowitch, Max Yellen, Abraham Carrel, Harry Dosberg, Paul Dosberg, Isadore Lansky, Joseph Palanker, J. R. Morrison, Irving Levick and Jacob Lansky. From the outset, the founders sought to create the first non-denominational all-day Jewish school for Buffalo, and this was reflected with the choice of a modern Hebrew name that did not have religious overtones. “Kadimah,” meaning “forward,” took its inspiration from the rising popularity of Hebrew language in the wake of a newly-created Israeli state. It also encapsulated the ethos of the founders’ hopes for the school: Forward looking, forward thinking and dynamic. The Kadimah School was incorporated on August 17, 1959.

Opening at the Jewish Community Center at 787, Delaware Avenue in the city of Buffalo, with Kindergarten and two grades, students at Kadimah studied in a bicultural environment with daily Hebrew instruction. Joseph Sapowitch, furniture dealer, (and simultaneously President of the Bureau of Jewish Education) was appointed first President of Kadimah. Toby Back served as President of the PTA and Max Yellen undertook to support the school’s financial base in its early years. Kadimah stressed a community school model, open to all streams of Judaism, and a place that emphasized “respect for all interpretations of Judaism.”

In 1962, Kadimah relocated into homes at Temple Emanu-El on Colvin Avenue and Ahavas Achim on Tacoma Avenue. The first Principal, Rabbi Moshe Weisberger, appointed for the opening year, was replaced by Rabbi Morton Summer. More grades were added in each successive year and by the end of the 1960s, Kadimah offered Kindergarten through sixth grade. After initial debates within the Jewish Federation about financial support for Kadimah, the mid 1960s saw the beginning of Federation subvention that remains in place today. In 1961, the PTA instituted Annual Dinners, that enabled parents and supporters to follow school progress and access local, national and international speakers. Enrollment increases led to relocation to larger premises and in 1968 Kadimah moved into the suburbs into Temple Beth El at Eggert Road. By the late 1960s, 70 percent of all Kadimah students lived in the suburbs. Mr. Isadore Levy was appointed Principal in 1968.

By the end of the 1970s student enrollment exceeded 200 students, and Kadimah had to split sites again. The Kindergarten relocated to Shaarey Zedek while the main school remained at Temple Beth El. The 1970s was a period of other transitions too. In 1972 the school celebrated its “bar mitzvah year” (13 years), and “Kadimah Day” was proclaimed. In this same year, the first eighth grade class graduated. The 1970s saw the institution of “in-service” learning for teachers, and Kadimah teachers joined the New York State Teachers Federation, AFL-CIO. To honor Rabbi and Henriette Klein, the PTA created a library in recognition of their support of the school. Kadimah moved again in the 1970s into a building at 300 Fries Road made available by excess public school stock. In 1975, Hannah Kaminker organized the nursery school (later named the Pearl and Mel Siegel Nursery School). Rabbi Harvey Silberstein was appointed Head of School in 1978.

By the beginning of the 1980s, support by the Jewish Federation increased, as the school accepted an influx of Russian émigré students. Relocation was forced again, when the local school district recalled Fries Road and Kadimah moved into 250 Athens Boulevard. A year later, in 1985, Kadimah moves into One, Cambridge Road with the help of Buffalo Jewish leaders including Nathan Benderson who helped purchase the building. In 1988 Kadimah is rated “excellent” in the New York State Elementary School Recognition Program, and Kadimah teachers were recognized at the school’s 30th anniversary the following year. Rabbi Silberstein was succeeded by Rabbi Aaron Fink as principal. Leonard Kaminker was the recipient of the first Keter Shem Tov in recognition of his work over the decades on behalf of the school.

During the 1990s, Dr. Irving Fried replaced Rabbi Aaron Fink as Principal. In 1991, Rabbi Isaac and Henriette Klein are recognized posthumously for their multiple roles as founders, mentors, teachers and supporters. Rabbi Barry S. Bank replaced Dr. Fried midway through the decade. Rivke Klein Berkowitz, daughter of founders, Rabbi Isaac and Henriette Klein, was appointed Vice-Principal in 1995. Kadimah’s 36th year coincided with another move into split sites, with the Lower School and Nursery School moving to Temple Shaarey Zedek and the Middle School making a home at the Jewish Community Center in Getzville. The later 1990s focused on long range plans for Kadimah and moving the school onto a firmer financial footing. A new Headmaster, Mark Stolovitsky was appointed at the end of the 1990s.

In 2001, the class of 1976 celebrated its 25th anniversary and Kadimah embarked on a major capital campaign headed by Dr. Charles Niles and Richard Zakalik to build a new unified home for the school. Mark Stolovitsky was succeeded by Jeff Shapiro in the middle of the decade. Efforts to raise money for the building of a new school continued with a significant donation by Dr. Sol Messinger, long associated with financial support of the school. In 2005, Kadimah moved into a permanent building, that was named the Sam, Paul and Sol Messinger Building in recognition of Sol Messinger’s support of the school. In 2007.

In 2007, Joel Weiss, a retired public school administrator, was appointed Head of School. When he retired from Kadimah in 2012, he was succeeded by Einav Symons, the current Head of School, under whose watch the school has implemented a series of new programs and initiatives, including robotics, distance-learning, a debate club, partnerships with area colleges and universities, and experiential learning projects with the Darwin Martin House and Silo City in Buffalo.

In 2019 the physical school closed its doors, but the Kadimah’s mission of Jewish education continues through scholarship and the Kadimah Scholars program.